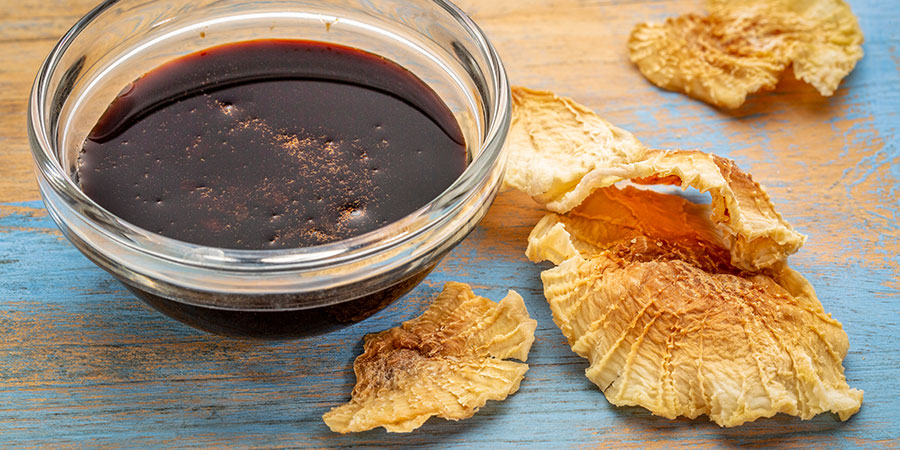 What the Heck is Yacon?

Have you heard of yacon? This is another blog topic from my What the Heck is list, pre worldwide pandemic. But like everything else in 2020, it was disrupted. As we navigate 2021, I’m viewing it as year of transition. The covid-19 vaccines are rolling out, global trade is starting to pick-up and people continue to have a heightened interest in food and nutrition. Let’s explore – next up in this blog series – What the Heck is Yacon?

Yacon is a plant grown traditionally in South America and is known scientifically as Smallanthus sonchifolius. This tuber has a texture like a water chestnut and a taste comparable to a mix of apples, watermelon, and very mild celery, with a touch of pear (1). Yacon is prebiotic and contains non-digestible fibres including fructooligosaccharides. It can be peeled and eaten raw. Yacon is also available in syrup and powdered forms.

Yacon syrup is a dark, sweet syrup extracted from the root of yacon with a thick consistency like molasses. This sweet-tasting alternative to table sugar is becoming popular ingredient as it is considered low-carb.

Due to the fibre and potassium content, plus it contains one third of the calories found in traditional table sugar, both yacon and yacon syrup have been linked to health benefits. In addition to it being available whole, powdered and in a syrup format, it is also sold as a nutritional supplement. To date, there is limited scientific human research on the health benefits of yacon. However, based on the emerging research, let’s review its potential health benefits.

Research has shown that yacon may have a positive impact on digestive health. A study completed with healthy adults by Geyer et al. demonstrated that there was a 1.1 to 1.3 increase in stool frequency, when 20 grams of yacon syrup was consumed daily for two weeks (2). The increased bowel movements regularity associated with yacon root could be attributed to its prebiotic fibre effect.

Yacon may be beneficial for heart health. An animal study demonstrated there was a decrease in both fasting plasma triglycerides and the “bad” cholesterol VLDLs when diabetic rats were fed yacon flour daily for 90 days (3). Also, yacon root is a good source of potassium. Potassium can help reduce blood pressure (4). Yacon shows promise for decreasing cardiovascular disease risk factors. However, more human research is needed to identify and confirm the dose response relationship.

Yacon syrup has been linked to weight loss and weight management. Animal research has demonstrated the short-chained fatty acid, butyrate produced when gut bacteria digests the fructooligosaccharides in the yacon can increase insulin sensitivity and decrease obesity (4). Other animal studies have also shown that prebiotic fibres in yacon have been linked to lowered ghrelin levels, adding in appetite suppression and potential lower caloric intake (6,7). However, more human clinical trials are needed to verify this research.

There are very few documented adverse effects related to yacon consumption. Due to its fructooligosaccharide content, it is not suitable for anyone on a low FODMAP diet. In addition, there is a possibility of yacon allergies. More importantly, there are potential health benefits to yacon with its unique sweet taste profile, followed with its reduced sugar content, plus its fibre and potassium content.

Remember no single food or ingredient is a silver bullet. Especially important now that we are still in a global health crisis, a lifestyle filled with healthy habits including a balanced dietary pattern with nutritious snacks, exercise and restful sleep is the best approach for long-term consistent, mind body health.  As we navigate 2021 (the year of transition), and the global economy picks up, will yacon or yacon syrup be an ingredient on your menu?

Is your company in the better-for-you space?

Contact Jane and her team to assist you on your next project or speak at your upcoming events including podcasts & webinars!