Wow – what a difference a decade makes. Last week, I saw a commercial for Pizza Hut offering gluten-free pizza. Gluten-free has hit the main, mainstream! I would have not predicted the staying power of the gluten-free market. Ten years ago in my business, most gluten-free foods had cardboard like textures, were very expensive, were missing many essential nutrients, did not taste good and were not easily available.

Amaranth
I first wrote about amaranth two years ago in my Buckwheat, Amaranth and Black Rice blog. Like quinoa (featured in my book The Need for Seeds), amaranth is actually a seed and not a grain. However, most people use it like a grain, so that is why I’ve included it in this blog. Did you know amaranth porridge is a traditional breakfast in India, Peru, Mexico and Nepal? There are over 60 varieties and it has quite the history dating back to the pre-Columbian Aztecs, now it’s literally popping up all over North America and Europe.

Among the wealth of nutrients (including protein and calcium) that amaranth provides, it also contains beta-glucans, which is soluble fibre known to decrease blood cholesterol levels and promotes heart health (1). Plus, there are 6 species of amaranth that may promote eye health, immune health and protect against respiratory infections plus aging (2). Finally, amaranth is helpful for digestive health because it’s a good source of dietary fibre to keep things moving!

Teff is a very nutritious ancient grain originally from Ethiopia that has found its way into health-food shops and supermarkets in Europe and North America. It’s about the size of a poppy seed and comes in a variety of colours. It’s being grown in India and Australia. And we are experimenting with growing it in the USA. This very mild, nutty tasting grain is eaten whole, steamed, boiled, or baked as a side dish and as a main entrée. It can be ground into a flour to make gluten-free pie crusts, cookies, breads, and other baked goods.

Teff has an excellent balance of amino acids, and it is also high in protein which is important for immune health (3). Its nutritional punch also includes calcium and iron (3,4). The results of a 2010 study concluded that adding bread made with teff into the daily diet may be one way to improve iron status in women (4). Teff has a low glycemic index (GI) and foods with low GI contribute to better management of blood sugars. And finally, this tiny gluten-free grain’s fibre content provides satiety (feeling of fullness) and many digestive health benefits. 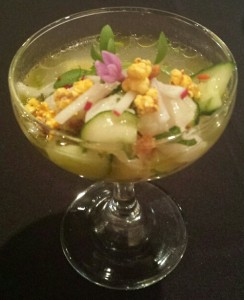 The origin and early domestication of sorghum took place in Northeastern Africa and the earliest known record is dated 8000 B.C. The first known record of sorghum in the United States comes from Ben Franklin in 1757, who wrote about it for producing brooms! Fast forward to 2015 and this ancient gluten-free whole grain can be popped as a snack, cooked whole in a pilaf and milled into flour for pizza crusts, pastas, cookies, muffins and breads. It has a slightly sweet flavour and is among the most efficient crops in converting solar energy.

I was first introduced to sorghum’s culinary versatility by Iron Chef Marc Forgione in New Orleans last year. And what is equally fascinating is its nutrition profile. It contains protein, plus antioxidants including anthocyanins which are good for immune health. The fibre in sorghum has been linked to promote digestive health. The bioavailability for the potassium and sodium found in sorghum is over 90% (5). Plus, it has an unique potassium to sodium ratio. This ratio has been suggested to alleviate health issues related to sodium.

There you have it, gluten-free grains 101 with amaranth, teff and sorghum! And even though I eat and enjoy a variety of whole grains including barley, oats and wheat, I’m thrilled to find nutrient dense gluten-free options that are showing wonderful culinary versatility.

Now if you’re in the mood for homemade gluten-free pizza, check out this recipe made with sorghum flour from epicurious.com