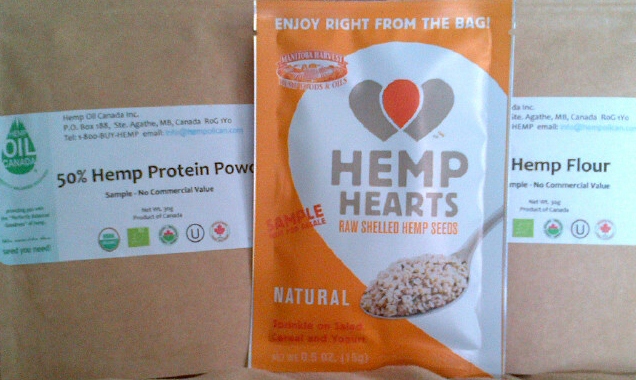 Often I receive new food, beverage and ingredient samples from suppliers to taste test or use in recipes. It is one of the interesting perks of being a Dietitian! Over the past six months, I’ve sampled avocado oils, ready to brew cocoa and hemp seeds, powder and flours. Hemp as a food is still a mystery to many, so I decided to create this Grow with Nutrition post All About Hemp.

Let’s start by understanding the difference between marijuana and hemp. Both industrial hemp and marijuana have the same taxonomical classification of Cannabis sativa. However, hemp lacks much of the primary stimulating psychoactive ingredient in marijuana known as delta-9 tetrahydrocannabinol (THC).  Hemp is bred to maximize the amount of fibre, seed and/or oil characteristics, whereas marijuana breeding aims to increase THC component (usually between 4 to 20%). Hemp is a stronger plant than marijuana which is actually quite delicate.

To get more hemp into your meal plan, toss 2 tablespoons of the seeds into your oatmeal or stir-fry. Or add them to your post workout shake for extra protein.